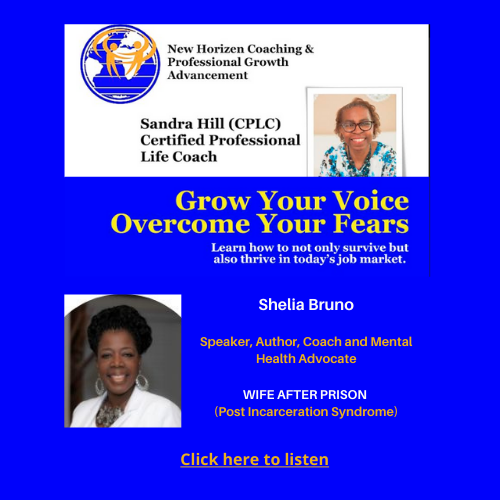 Did you know that many current and former incarcerated individuals struggle silently with a mental health issue?  Many aren’t even aware they have an issue and those that are aware, don’t seek treatment because of the stigma attached.  Psychological speaking though, the incarcerated individual is not the only one impacted.  Family and communities are also impacted.  Sheila Bruno gives voice to the voiceless and helps others seek to understand.

Sheila Bruna is a Certified Reintegration Life Coach who gives a voice to the psychological impact of incarceration or Post Incarceration Syndrome.

In 2014, after being apart for thirty-eight years, Shelia became reacquainted with her high school sweetheart, Kevin Bruno, who was incarcerated for twenty-eight of those thirty-eight years. Fifty-three days after their reunion, they were married. However, in 2016, Kevin became barely recognizable, both in character and in behavior. With each passing day his behavior worsened, leading Shelia to cry out to God, asking “What is happening to my husband?” Her kind, caring, loving, affectionate husband was now sliding in and out of depression, easily irritated by the least significant incidents.

Shelia’s cry for help was heard by God, which led her to Google the question: Can a boy become a man in prison? Up popped two articles by Terry Gorski, The Psychological Impact of Incarceration and Post Incarceration Syndrome and Relapse.

Desperate for support to help her resolve the psychological disorders that had crept into her marriage, Shelia looked for support groups that dealt with the after-effects of incarceration. To her dismay, there weren’t any, so she created one: The Wife After Prison Support Group.

Shelia has reached over 30,000 people in her quest to raise awareness of Post Incarceration Syndrome. She has made it her mission to provide education about the devastating effects prison leaves on their loved ones.

And, after a period of successful mental health treatment, Shelia and Kevin’s marriage is now more robust than it’s ever been. Shelia’s transparency and determination have encouraged others to break through the unrealistic expectations they may have for themselves and for their loved ones who are being released after serving prison sentences.

Working in prison ministry programs and as a volunteer in several prisons throughout Texas has taught Shelia to see people who are made in the image of God and not as prison inmates. Shelia has built relationships with both currently incarcerated men and women and those who are about to be or have been recently released to help them successfully transition back into society.

Shelia has now authored her first book, Wife After Prison, which is available on Amazon and on her website.